On August 24, LWVPDX Action Chair Debbie Aiona testified before the Portland City Council on the proposed Portland Committee on Community-Engaged Policing (PCCEP). She expressed appreciation for the steps being taken to involve the public in the selection of PCCEP members, while also strongly recommending that all PCCEP meetings be open to the public. Read all of her testimony here.

The League of Women Voters of Portland provides nonpartisan information about all our local and statewide elections. We also research issues and work to improve government policies. When you think about all the ways we’ve got you covered, we hope you will support us. Please make a donation, so we can continue to help you. Our Board is matching Giving Tuesday donations.

Below are a few examples of recent LWVPDX activities and plans for the year ahead. To learn more and donate, go to our Giving Tuesday webpage. You can donate online or by mail.

Read the League’s report on the ballot measure to change Fairview’s City Charter here!  Ballots were mailed to voters October 13. To be counted, voted ballots had to be received by 8 pm November 2.

This measure passed with more than 86% of the vote in favor.

Every ten years, the City of Portland appoints a commission to review its Charter. The City Charter is the organizing document that structures the City and its leadership.  LWVPDX is following the Charter Review Commission, which  has been underway since late spring. Several of our board members are attending the public meetings. We are seeking ways the League can contribute to the discussions, considering our long-term commitment to improving local governance.

The Charter Commission identified early that two critical topics needing research by subcommittees are Portland’s form of government and City Council election processes. These are both areas important to LWVPDX. Our expertise was recognized in a presentation by Charter Commission Project Manager Julia Meier when she presented a chart from the LWVPDX’s 2019 study report on city government.

These two topics will be the focus of the first phase of subcommittee work, which aims to be completed in time to submit charter amendments to the November 2022 election. Three other topics (service alignment across bureaus; growth of democracy; transparency and accountability) will be researched in the second phase of subcommittee work, which will work toward amendments for later elections.

At the commission’s June 28 meeting, LWVPDX President Debbie Kaye provided testimony in support of the Charter Commission considering how to include transparency of city functions in their review (testimony by zoom pictured above). The League joined the Society of Professional Journalists, ACLU-Oregon, and Open Oregon in signing a joint letter proposing a new city position of Transparency Advocate to help ensure city bureaus are open and accessible to the public and to organizations such as news media that rely on public information.

The Charter Review is an exciting time to make a long-term difference to improve how our city operates, identifying key ways to make City Hall more responsive and more effective in implementing the changes Portlanders want.

To learn more about the Charter review process from the city, click here. You can sign up for email updates from the Charter Commission at this website. Oregon Humanities has shared a helpful comic strip by Beka Feathers and Aki Ruiz that makes sense of the process.

Please contact board member Audrey Zunkel-deCoursey to learn more or share your perspectives on the City Charter Commission.

Changing the culture of the Portland Police Bureau (PPB) must be a key goal of bureau leadership, according to the new LWVPDX advocacy position. After conducting a year-long study of Portland police oversight and accountability, the League’s membership concluded that, “PPB must end practices that systematically place police in opposition to or in domination of the public, or that treat community members as enemies.”

The LWVPDX position statement, “Portland Police Bureau: Oversight and Accountability,” begins by calling on the PPB to meet the following goals:

The new position is based on the results of a careful nonpartisan study of the PPB.

MEmber discussion and Consensus were Key to writing the position statement

The study then went to the LWVPDX membership for review. Portland League members participated in discussion groups, answering questions about the issues the study covered.  A “consensus committee” wrote the new advocacy position using the points upon which members reached consensus during their discussions.

In addition to calling for reduction in bias-based policing and fair and equitable treatment of community members, the new position statement on PPB Oversight and Accountability calls for reduction in use of force through de-escalation and for alternatives to armed police, such as using unarmed, appropriately trained civilian employees to respond to certain calls.  It also calls for improved transparency in the scope and timeliness of releasing police records, as well as for strengthening civilian oversight and community involvement. It supports giving authority to oversight groups to conduct independent investigations of police misconduct and to recommend discipline.

We’ve updated our Directory of Elected Officials, with information from the results of the May 2021 election. Read it by clicking here. You’ll find information about how to contact all the elected representatives who serve people in our area. There are websites, emails, or phone numbers for everyone from President Biden to the directors of the Fire Districts.

When you have a concern about government, you can use this contact info to ask questions or express your opinion. The Directory also has information about political parties and voter registration. Finally, if you need more details about area governments, check out the Contact Elected Officials page of this website.

The video of the Panel Discussion about Immigration and Refugee Resettlement is now posted on our homepage here. We also have a 7-minute video about the Case Method of teaching High School Civics made after our October event. It is posted here.

The League of Women Voters of Portland has moved to a new office space. We have begun looking for a new half-time staff person to help in our office.

In the fall of 2021, the League is advocating with our new positions on Police Accountability and City Government. We are also applying our long-time positions on transparency, equality of opportunity, air quality and voting rights to our work on issues before the Charter Review Commission, City Council and U.S. Congress.

Oregon is preparing to take in 1,200 refugees in the next 12 months. Resettlement agencies are working to identify long-term housing while providing culturally-specific education, including language and job training, schooling, and legal aid. https://t.co/wL8BXkNSSB

h J R
#LWVofPortland has you covered for accurate, nonpartisan voter information. Will you help LWVPDX help you by making a donation toward the Voter Service costs associated with printing, translation, web hosting, and video production … you’ll be the winner! https://t.co/3eKcEhTthP https://t.co/OFYfEcMt58 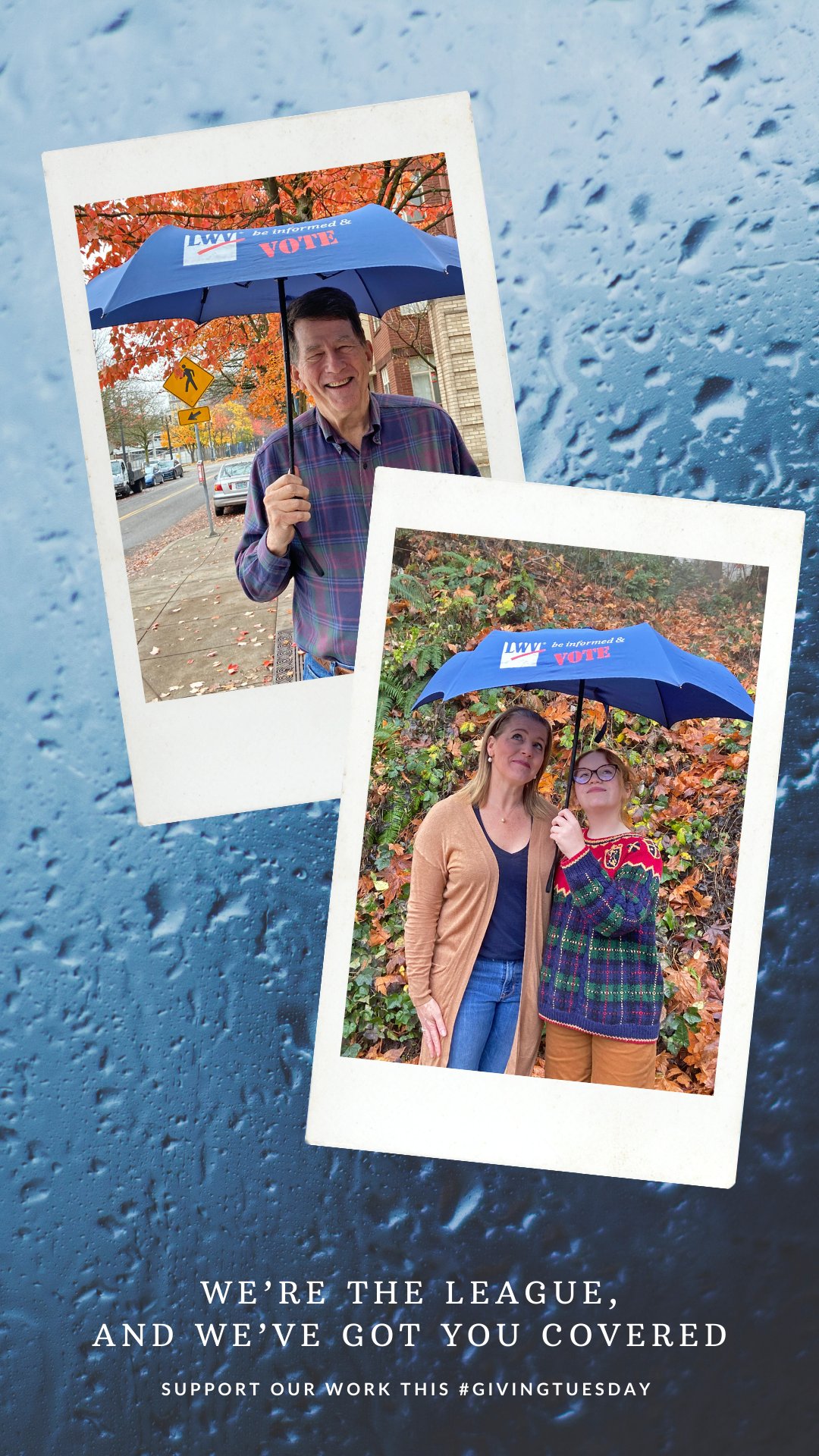 h J R
Will you contribute to the work of #LWVofPortland? #GivingTuesday is tomorrow. Donate here: https://t.co/3eKcEhTthP https://t.co/TbqFGNn4Lh 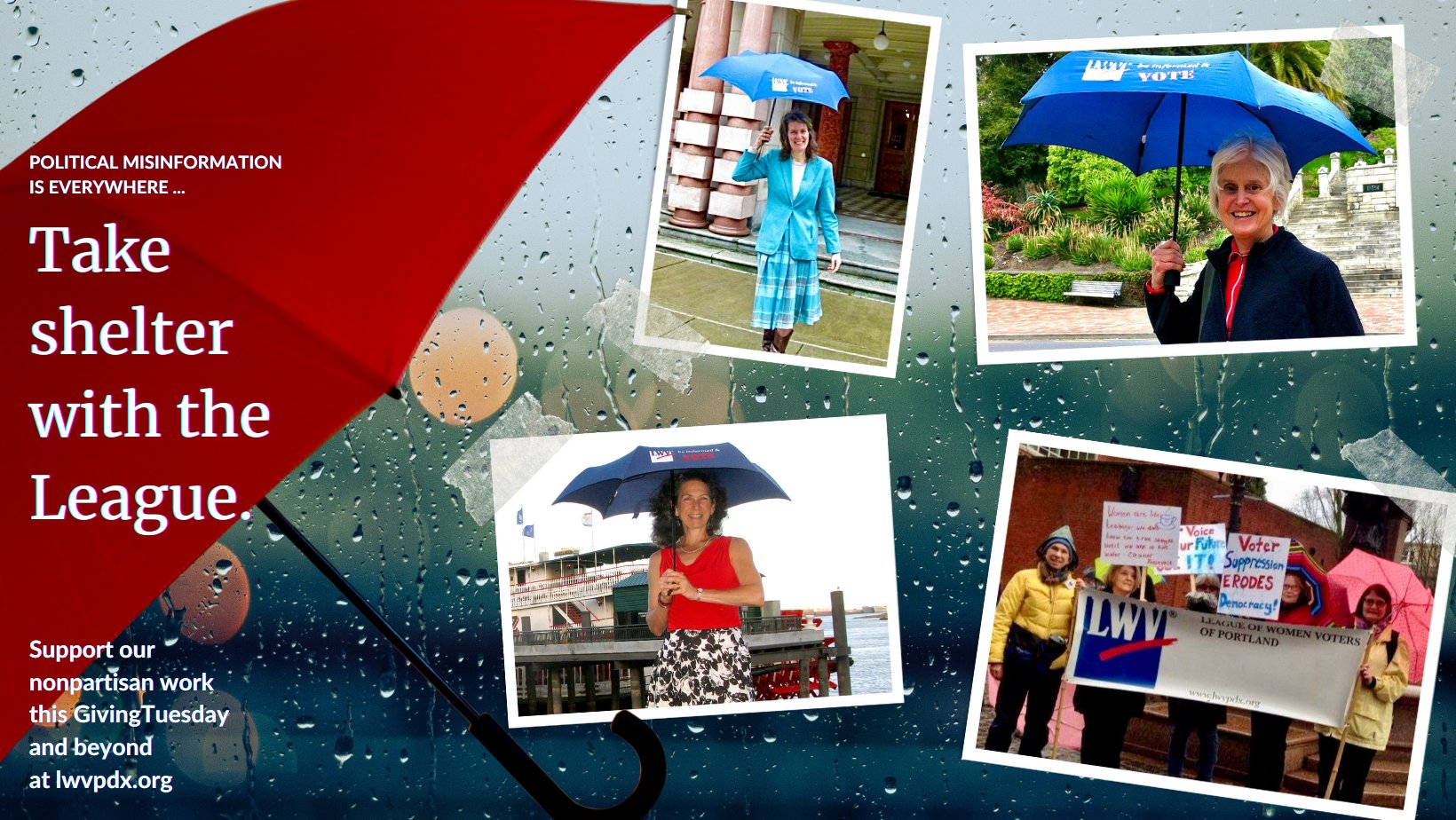